Mandy talks about her life, sexism in the industry and she gives women some much needed advice.

“Knowing that people are increasingly interested in the female perspective in cinema makes me feel like I’m not a niche, but mainstream, which is what I’ve always thought anyhow.” – Mandy Fabian

Mandy Fabian has loved movies since she was a kid. Working as an usher in a local movie theater, was “a dream job because I could see every movie for free, as many times as I wanted.” Growing up, her heroes were Rob Reiner, Steven Spielberg, and Nora Ephron, “people who made mainstream, upbeat movies that made me laugh and cry.” A film major at Vassar, she admits, “that’s probably what kept me going… Imagining stories and characters, and then wanting to hear what they have to say, wanting to explore the dark, twisted, and frankly hilarious machinations of human beings falling in love, facing death, clinging to their illusion of control, and always wanting something they don’t have. I’ve always thought pain, vulnerability, failure, hardship, and struggle was very funny and extremely endearing, and none of us are exempt from it.”

Fabian’s passion and commitment have paid off. Her film SOMEBODY’S MOTHER (2014)  won Best Short at the California Independent Film Festival and her short film YOU’RE BREAKING UP (2015) was an official selection of the Palm Springs International ShortsFest. All three of her short films received theatrical and TV distribution. The recognitions keep coming: she was accepted into the Sony Pictures Television Directing Fellowship in 2014, won a Best New Filmmaker award from NewFilmmakers LA in 2015, and recently was accepted into Meryl Steep and Oprah Winfrey’s Writer’s Lab, sponsored by NYWIF (New York Women in Film). 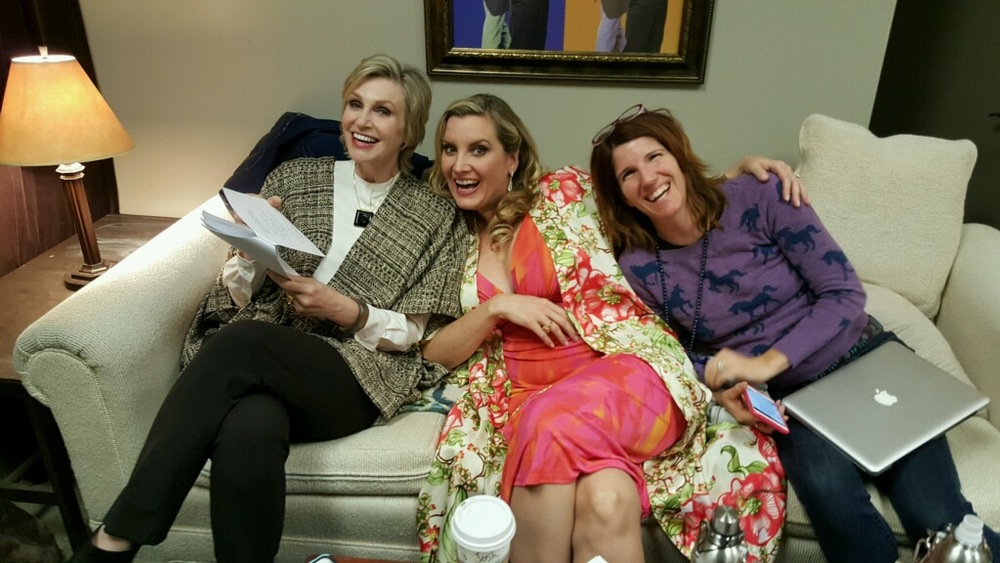 Making her audience laugh came easy for Fabian, but imagining herself as a director was a lot tougher, especially in her formative years. “I never saw female directors growing up. They were all men. Anytime anyone referred to a director, it was a “he.” Later, when she started becoming aware of other women directors, it was considered an exception, not a norm. This lead her to wondering, “if maybe men had the guts to survive in the industry, and I was too sensitive, too soft.”

Since then, she’s discovered, “it’s not a gender thing, it’s a confidence thing.” Now she focuses on the craft, educates herself, and strives to challenge herself as an artist. “Because if there is sexism,” Fabian states, “the way to overcome it is to be the best person for the job. To be the best at your craft that you can be. And if I have to be better than a man to get the same job, well, I’ll never regret working hard and exceeding expectations.”

“I demand great things from myself, because I feel very privileged to be part of the movie-making community, and because every crew member deserves a director who’s giving 110%, who respects them enough to leave it all on the court, as it were. I’m that person, and that’s the thing I’m most proud of.” – Mandy Fabian

For female directors who are still trying to break into the industry, Fabian admits, “the industry is already making changes, but this is a giant ship to turn around… and making systematic changes takes time.” Despite the changes happening faster in television than in film, Fabian says, “I’m seeing a ton of female indie filmmakers doing really excellent work, and getting acclaim for it.” Festivals like Sundance are also pushing female friendly programs and initiatives, which is thrilling.” Fabian goes on to say that “this is what it will take to normalize the thought of a “female” director, and give us the same experience, the same respect, the same opportunity as male directors.” When money is the obstacle, especially in feature films, Fabian feels, “offering a first time director resources they can use to make a movie is a Godsend.” (Note: Panasonic is incredibly supportive of new filmmakers.) ”

As Fabian continues in her filmmaking career, she offers up this advice: “Stay positive, stay strong, focus on the work. Don’t buy into the story that it’s only hard because you’re a woman. It’s a hard business.” Fabian recently realized that she was spending a lot of time struggling with how she was going to move forward, instead of just putting her head down and and doing her work. However, she knows that more than anything, “when I get my shot, what I need is a honed craft and a stellar, rock-solid discipline, not anxiety about whether it’s going to work out.” Her optimism stems from her belief that “we all need to… celebrate the wonder of each other’s work, not just the odds we face.”

Fabian also co-created, wrote, and directed THE YOUNG HILLARY DIARIES, Lifetime’s first original digital series (see trailer below). Coming up in 2018, Fabian is making her first feature in May for which she is “So excited!” Until then, she’s developing a pilot with the Mark Gordon company, and working on writing two other movies.

“I feel very lucky to have gotten to this point, and I think it’s all happening because people are crying out for more women’s voices to be heard. I feel more supported than ever.”